Twitter CEO Jack Dorsey confirmed to investors that bitcoin will be a big part of the company's future, as he sees opportunities for integrating cryptocurrency into existing products and services of the social network, including trading, subscriptions and new additions such as Twitter Tip Jar and Super Follows.

Today, Dorsey called bitcoin one of the three directions of Twitter's development, among others – artificial intelligence and decentralization.

Oh man, Jack Dorsey says he thinks Bitcoin is key to Twitters future. Says it will "ensure peoople and companies can freely trade goods and services anywhere on the planet" (Alex Weprin) 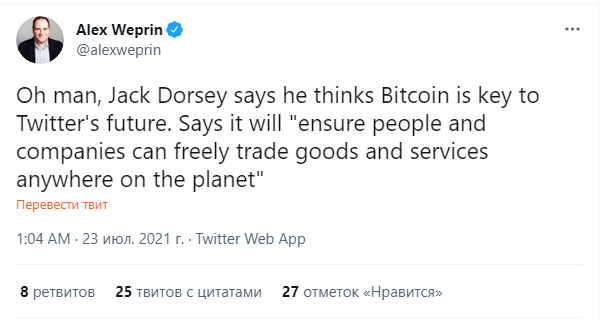 If the Internet has its own global currency, we will be able to move much faster with products such as Super Follows, Commerce, Subscriptions, Ofc Tips. Thanks to this, we will be able to reach every person on the planet, instead of following the principle of "market by market," Dorsey explained.

I think this is a big part of our future. There is a variety of innovations besides currency, especially when we think about the great decentralization of social networks and the legacy of a great economic incentive. Therefore, I read that it is extremely important for Twitter and its shareholders that we continue to explore the space and actively invest in it.

This is probably the first time that Dorsey has publicly spoken about the integration of bitcoin into the Twitter product line.

Dorsey has been a staunch supporter of bitcoin for many years. Speaking about cryptocurrency, Dorsey said that it reminds him of the early days of the Internet and that there was nothing more important in his life that he could work on.

The top manager presented bitcoin in his tweets, counting off the second-quarter earnings, as a tool that can help the company move faster in terms of the dispersion of its products. In his opinion, BTC is the best candidate for the role of the "national currency" of the Internet.

It is noteworthy that the bitcoins purchased by Square in 2020 for $ 50 million were worth $ 25З by February 2021. At the beginning of this year, the company additionally acquired a cryptocurrency for $ 170 million.

Relatively recently, Jack Dorsey, together with rapper Jaу Z, launched a bitcoin fund worth $ 23.6 million and announced plans to bring his second company Square to the market of decentralized financial services with the help of bitcoin. Earlier this year, it acquired a controlling stake in the music service TIDAL from Jaу Z to demonstrate how blockchain and cryptocurrency technologies can change the music business.